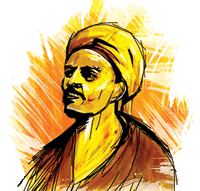 Yunus Emre is a great figure who has made a deep influence on Turkish literature, culture and view of life. He was a Turcoman dervish who lived in last quarter of the thirteenth century and the early part of the fourteenth century. These years coincide with the ending of the Seljuk Period and the foundations of the Ottoman Empire. Many cities were established at that time, and many of them had become scientific and cultural centers in the Anatolian Seljuk Period.

However, the Mongolian invasion and the subsequent depravations lead the people of Anatolia into poverty and despair. This difficult period could be left behind through the collective efforts of great sufi leaders such as Mevlana, Hacı Bektaşl-i Veli and Hacı Bayram Veli.

His poems imply that he received his education in Konya. He was well educated in the Arabic and Persian Languages, which were the official languages of his period, and Islamic sciences.