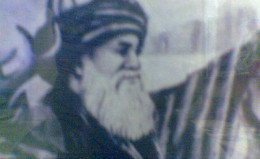 Hazrat Sheikh Sayyid Ahmed er-Rifâi (1119-1182) was born on a Thursday in the first half of the lunar month of Receb, in Hasen, in the Vasit province of Iraq.

When he was seven years old, his father Sayyid Sultan Ali passed away in Baghdad. From then on, his maternal uncle Hazrat Sheikh Sayyid Mansur ar-Rabbani el-Betaihi took him into his care and education.

He learnt Qur’an from Sheikh Abd us-Semi el-Hurbuni in Hasen, his birthplace. He had already committed to memory the whole of the Qur’an when he was seven. During the same year, after the death of his father, his uncle Sayyid Mansur el-Betaihi transferred him and his family to the region of Dicle. His uncle sent him to Ebu’l Fadl Ali el-Vasiti who was an expert in the canon law of Islam, a commentator on the Qur’an and a preacher.

On the other hand, while he was attending the dhikr circles of his uncle Sheikh Mansur er-Rabbani, he was also attending the courses of his other uncle Sheikh Ebubekir who was a major scientific figure at the time. He memorized the book “Tenbih” of Imam Ebu Ishak Sirazi, a book on the Fikh (Muslim canonical jurisprudence) of Imam Shafi. He also wrote an interpretation of this book; however, this text was lost during the Mongul invasions.

From the earliest age, he dedicated his entire time to learning the ilm (knowledge) of Islam. When he was twenty, Ebu Fadl Ali (the Sheikh of Vasit) and his teacher awarded him a “Shahadatname” (which represented the studies of canonical law and the sciences of Islam). He titled him as the expert of both the external (zahiri) and the interior (batıni) sciences. His teachers and his Sheikhs altogether confirmed to his greatness and impeccability.

He stayed in Nehr-i Dicle for a while, after which he came back to his father’s public house for travellers in Hasen and gradually became very famous there. His uncle Sheikh Mansur commanded him to live in the dervish lodge of Sheikh Yahya en-Neccari who was his grandfather from his mother side. It was during this time he began to preach in the dervish lodge. When he was twenty-eight, his uncle Sheikh Mansur bequeathed him as his successor in his dervish lodge and as the head of his Khalifas (successors) after his death. His uncle died in the year of the bequeathing. When he was thirty-five, the number of his murids was over seven hundred thousand.

Hazrat Sheikh Sayyid Ahmed er-Rifâi was totally devoted to living and teaching the Sunnah of Prophet Muhammad (saws) and the Quran. He believed that the only trade for a wise man was to show the way towards Allah and to direct the hearts towards Him.

Every speech, action, behavior and breath of Hazrat Sheikh Sayyid Ahmed er-Rifâi was for Allah. He always had a smiling face; he was always very patient, modest and good-tempered. He never became cross with anyone and never asked any help for his own benefit, all his love for Allah. He never saw his family and himself as superior to other people.

He asked people to protect themselves from excesses, such as overeating and oversleeping. He encouraged doing worship during the nights. He also encouraged to remain far from people who do not know their limits, who behave in an excessive manner, who see themselves superior to others and who dispute with each other.

He used to do his own housework. He used to carry the firewood prepared for him to the house of other people in need.

He used to care especially for the orphans, for the sick, for the blind. He was very compassionate to people in need. He respected old people and encouraged everyone to serve them. He used to recite the words of the Prophet Muhammad (saws); “Whoever serves an old Muslim, Allah assigns people to serve them when they are old.”

He used to visit the leprous and the bedridden, wash their clothes, bring their meal, sit and eat with them, and he asked them to pray for him. He healed wounded animals, and said; “Caring for the creatures of Allah is a cause for the human being to be close to Allah.”

He showed great mercy to orphans. He cried for the poor; he was sad with their sadness and glad with their joy. He treated them with humility and saw himself as one of them.

He respected the scholars of the canon law of Islam and asked everybody to respect them, saying; “The wise are the leaders and the fundamentals of the community.”

He never stored any commodity in his life. Although he possessed great wealth, he never had more than two sets of clothes at the same time, neither in summer nor in winter. Although his movable and immovable property was much more than property of governors and the wealthy men of his time, he never used any of it for his own benefit. He used to distribute all the revenue of his estate to the dervishes and the people who came to the dervish convent. He didn’t leave any commodities to his children.”

A true lover is proved such by his pain of heart; no sickness is there like sickness of heart.Rumi, Mevlana